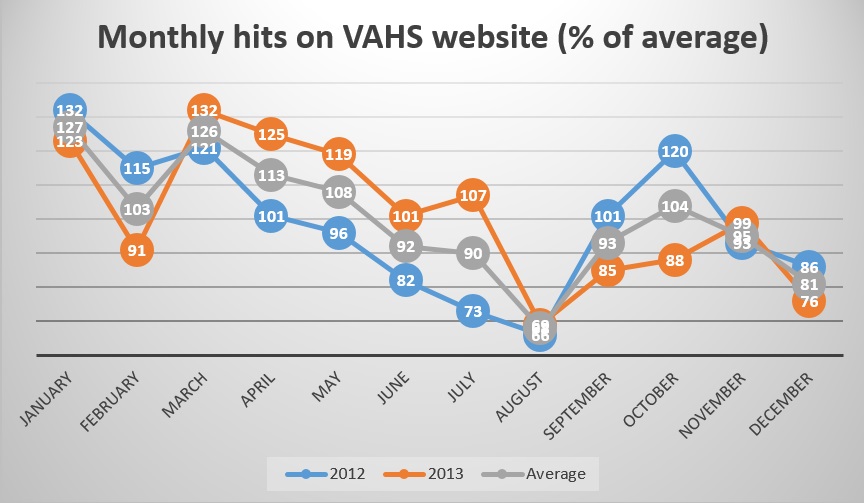 This is my third year of blogging. During the first two I was writing for and running a co-authored blog for the Voluntary Action History Society. For nearly a year now, I’ve been blogging simply as myself. Over that time, I’ve been keeping an eye on the hits received by these websites. Of course, how much attention any blog gets will vary hugely depending on what and how much is posted, as well as how well it’s promoted elsewhere on and offline. Despite this, there is a pretty clear and rather unsurprising pattern. Academic blogging is seasonal.

What academics do at different times of year is, of course, very different. It’s therefore not surprising that we read and use blogs differently too. So from the two blogs I’ve run and written for, what is the pattern over the year?

The month-by-month picture from the VAHS blog is not entirely consistent from one year to the next. Sometimes (probably far too often) I tried out different ways of doing things, which occasionally had an impact on the number of hits received. For the most part I suspect where the figure was notably higher or lower than the last year, this was primarily a question of how well the latest posts were promoted on social media. In the spring of 2013 the website saw more attention than usual for the website in the run-up to the society’s summer conference. Despite these variations, the pattern across the year – between the two years on the VAHS blog and so far being repeated fairly closely on my own blog – is clear.

The fewest hits come in the summer and at the end of the year, when academics are on holiday. The most come in the first couple of months of the academic year and the first three or four months after the Christmas break.

That may sound entirely unremarkable, but it does tell us something interesting. It tells us academics read and use blogs as part of their work (or perhaps as a distraction from it) rather than in our time off. That doesn’t necessarily fit with how we think about blogs when writing them. For example, we might start and/or write a lot for a blog over the summer when there are fewer demands on our time. In that case, we should expect to see our audience increase over the following months, but that doesn’t necessarily mean we’ve cracked the whole blog-writing lark so much as it means the people who might be interested have just got back from Venice. It also means we should expect to see that audience wane just in time for us to question the popularity of the blog in time for its first birthday. An inexorable rise in readership may come to some outstanding blogs, but if my experience is at all typical then that would be bucking the trend.

This is something we need to take into account when planning to use blogs for research dissemination. If the advantage of blogging over some other, more traditional media is largely the size and diverse nature of the potential audience, when is the best time to reach them? Is a good post best kept back for a few months until the audience will have returned? Are some types of posts or some subjects better suited to out-of-season blogging than others?

I’d be interested to hear if other academic bloggers have found the same trend. Is there a summer lull? If so, do you see that as a problem? What, if anything, do you do about it?

As academics we’ve long thought hard about the books and articles we write. We tend to think of blogging in those terms: as another form of writing, presenting the end product. Sometimes that’s exactly what it is. But others, and some of these are the best, blogs can be used most successfully as an interactive way of building up a discussion while working towards some other final product. Used in this way, blogs are more the research seminars and conferences that we can all make it to. On that basis, and following on from the excellent History Lab Plus event earlier this year on Social Networking for Historians, blogging is something to which we’re going to have to give a little more thought in future.

7 Replies to “Academic Blogging is Seasonal”