If the most recognisable feature of the British National Health Service is not having to pay, then how did payment work before 1948? In the three decades following the First World War, patient payments took on a far greater prominence than it had before – both in the form of pseudo-insurance hospital contributory schemes and direct payments effectively means-tested by a medical social worker known then as a ‘Lady Almoner’. This has typically been characterised as a radical change, either effectively privatising or democratising the charitable and public hospitals of the day. 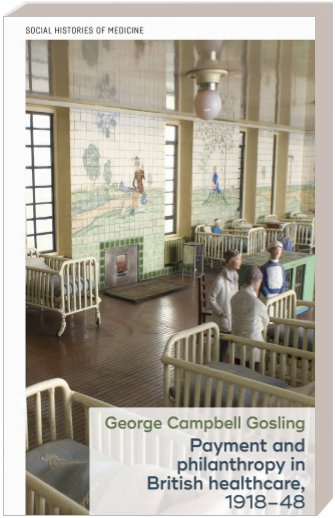 This often-misunderstood aspect of the pre-NHS hospital system became the focus of my Wellcome-funded doctoral research at Oxford Brookes University on interwar Bristol’s mixed economy of healthcare. This was then broadened out to place the local case study into a regional and national context for a monograph, Payment and Philanthropy in British Healthcare, 1918-48, published by Manchester University Press in 2017, as well as a chapter exploring how this played out in maternity hospitals for the Perceptions of Pregnancy collection, published by Palgrave Macmillan the same year.

I continued this research during my time as a Research Fellow at the University of Warwick on the Cultural History of the NHS project in 2016-17. The question of how the medical social work profession, who had been brought into the hospitals to run these payment schemes, adapted to the new free health service was explored in an article for the Women’s History Review in 2018.

Ongoing research looks at the hospital’s continuing importance as a site for voluntarism and fundraising in the era of the NHS. Just a few years after the establishment of the new service, older traditions were resurfacing in the new form of hospital Leagues of Friends. These groups can provide a fascinating case study of the welfare state providing a platform for voluntary action.

Click here for blog posts relating to the history of healthcare

Britain – Healthcare, c.1900-48 is a series of short lecture videos recorded for MASSOLIT in 2020, designed to give school students studying economic and social change in modern Britain a deeper understanding of the NHS, how it came about and what it replaced.

GC Gosling, The Birth of the Pregnant Patient-Consumer? Payment, Paternalism and Maternity Hospitals in Early Twentieth-Century England in Jennifer Evans and Ciara Meehan (eds), Perceptions of Pregnancy from the Seventeenth to the Twentieth Century (London: Palgrave Macmillan, 2017)

Glen O’Hara and GC Gosling, Healthcare as Nation-Building: The Case of the British National Health Service  in Paul Weindling (ed.) Healthcare in Private and Public from the Early Modern Period to 2000 (Routledge, 2014)

The NHS Long Term Plan, prevention, and a century of promises, openDemocracy, 11 January 2019

Interviewed by Ben Rooth on the history of the NHS for A health check for a national treasure, Manchester Evening News, 13 July 2018

Interviewed by Horst Groß on the history of friendly societies, health insurance and paying the doctor for German radio documentary series Wissen, broadcast on SWR2 on 7 February 2018.

Interviewed on the pre-NHS history of healthcare in Britain for BBC History Magazine podcast, July 2012